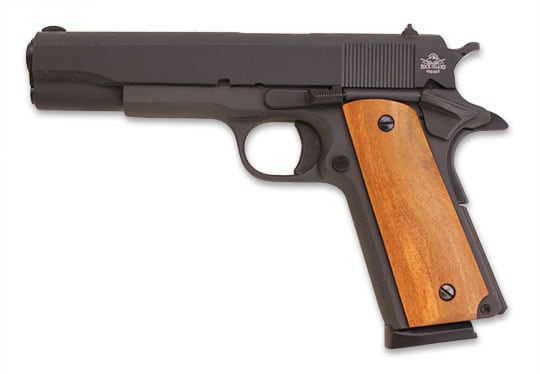 Even though we have so many different pistols to choose from, it’s not easy to get the right one. And, if you’re not an expert on the given subject, you will have a really hard time! You can easily look up the most expensive models on the internet, but there’s no guarantee that you will find what you need.

Instead of trying to spend countless bucks to get your dreamlike pistol, you should take a different approach. There are plenty of pistols that are very cost-effective, which means that they offer a very nice quality and they are very affordable at the same time. It is a much better strategy because not only will you save your money in the long run, but you will also get a great pistol as well.

A good pistol is, in fact, rarely the most expensive one. Rather than that, it’s a highly functional pistol that comes with a fair price. Rock Island 1911 is a model that fits these standards perfectly, and it’s a must-have for any gun enthusiast.

If you’ve ever heard of the legendary .45 ACP M1911, you should know what to expect in this case. This oldtimer is the father of pretty much every single modern pistol nowadays, and for a good reason. Rock Island 1911 is not an exact replica of M1911, but the basic concepts are identical nonetheless.

Before examining this pistol further, let’s take a closer look at the original M1911 first. 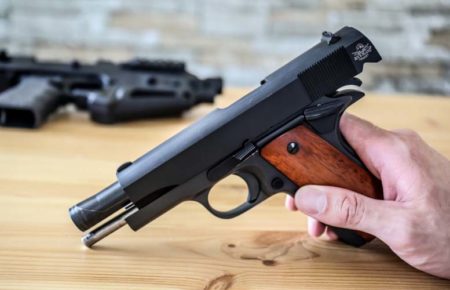 As we noted above, M1911 is the “big daddy” of almost every semi-automatic pistol on the market nowadays (including Rock Island 1911). This timeless overlord was initially designed in the late 19th century, and its popularity was increasing exponentially ever since. As a pistol with such a long tradition and a pistol that was used in all major worldwide conflicts in the last 100 years (including World War I and World War II), it obviously deserves a separate section in this review.

The whole story began in 1895. John Browning created the first gas-operated pistol. The concept of using the hot gases to make the pistol functional was widely accepted by the entire industry very quickly. And, even though that was just an early prototype, we can see that this concept is still widely used even nowadays. 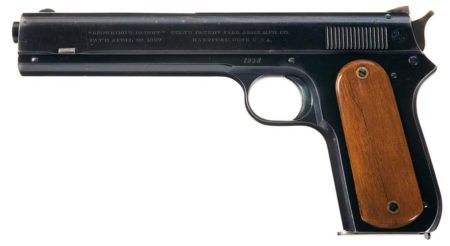 Soon after he completed his prototype, Browning designed the first model that would use these features – Colt Model 1900. Along with that, he started perfecting the optimal design of his first gun so that the future models could all benefit from it. The American army got their hands on this product, and they started testing it. The results were not that good. While the functionality was suitable, they needed a bigger gun than the one they got.

Browning and Colt made a couple of revisions before they figured out how to make “the ultimate pistol.” .45 ACP 1905 was also tested by the American army, and it managed to get the green light. The next task was to improve its design and make it even better. Many companies tried to achieve that but, obviously, Browning and Colt had the most success. With the addition of a manual safety switch, we got our .45 ACP 1911. It’s the model that would, at one point, result in a cult M1911 that we know today. 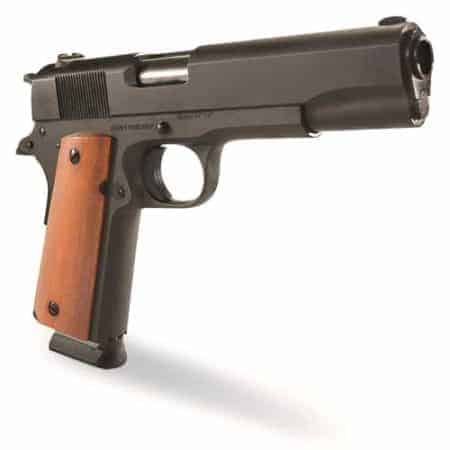 We should add that, for a long time, Colt used to be the only manufacturer of M1911. That’s not the case anymore. Even though some variations of this legendary gun are drastically different than the original, the core concepts are still there. Rock Island 1911 may not be the original M1911, but it’s not far off either.

Out of all the different variations, Rock Island 1911 is the closest you will get to the timeless M1911. The barrel is 4.25”  long, and the overall capacity is eight rounds. The original gun had a 5” long barrel and the seven-round capacity. Even though there are clear differences between the two, you can barely notice them.

I can say that the pistol is very well balanced and it’s extremely comfortable as well. Unlike many other pistols, it’s not that heavy either. In fact, you can easily wear it on your hip as the barrel is not too long to create a distraction. The recoil is fairly decent, and the capacity feels right too. Anything less than eight shots may not be enough. On the other hand, a bigger capacity could be overwhelming. Some people prefer big capacities nonetheless, but I feel that we have the right consensus here.

The front sight comes with a narrow tenon (which is pretty much an industry standard) while the rear sight is a classic dovetail sight. You can adjust the rear sight as well, but it’s not something we can recommend.

We also have a bull-type barrel with six rifling grooves built into it. It takes about 16 inches (on average) to rotate one full turn. We don’t have anything to nitpick here as this kind of design works well in practice, and if it’s not broken, we shouldn’t fix it either. 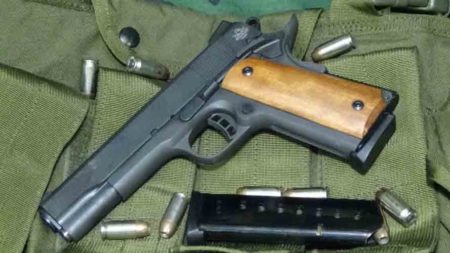 The trigger is not the best one I’ve ever seen, but it’s still fairly decent. The pull is very compact, and you shouldn’t have any issues to fire multiple different shots in a row. The trigger is also enhanced with both grip safety and mechanical safety as well. Even though the risk of (potentially very dangerous) injuries is minimized, you should still be careful, and you shouldn’t be reckless when you hold your Rock Island 1911. That should be general advice for any other gun too.

The pistol is 8 inches long and 5.5 inches high. At the same time, it weighs about 2.73 pounds (when you fully load it). It also comes with a wooden grip and a very modern finish. Clearly, that’s not the same experience that the original M1911 gun can provide, but the visual aspect is pretty much spot-on.

We should also add that Rock Island 1911 is a very accurate gun as well. Even if we talk about very long distances, it’s easy to lock-on and hit your target effortlessly. We also have to add that the pistol could jam a couple of times while it’s still new and “fresh.” After you fire the first 500 shots, however, these issues should disappear completely.

As we wrote above, this is not M1911, but it’s very close to it both in terms of design and quality as well. It’s also not the best pistol out there, but in this price range, it’s certainly one of the most appropriate offers. With this kind of pistol, you can be sure that you will get both quality and convenience at the same time. If you want a reliable pistol for your collection, but you don’t want to spend a lot of money, you should absolutely give this one a chance.

On the other hand, if you want a more high-end pistol, you should try to find an alternative solution, such as the HK VP9 handgun.

We were very impressed with the Rock Island Armory 1911 handgun. It's a very historical handgun with lots of power and culture behind it.