The Ruger AR-556 is one of the absolute best semi-automatic rifles for the money. We definitely recommend this firearm!

It goes without saying that Ruger is a trusted name in the gun industry. When they announced that they were making an AR-type rifle, every gun enthusiast was ecstatic. That rifle was the SR-556, and to say it was a big success would be quite an understatement. However, one of the not-so-great features of this rifle was the price tag.

Luckily, Ruger has now introduced the Ruger AR-556 to the world, and at a very approachable price.

Now the big question is whether this rifle has all the right features. In this review, we’ll take a look at the look, feel, accuracy, reliability, and of course the price of this rifle. First, let’s see what the Ruger AR-556 has to offer, look-wise. 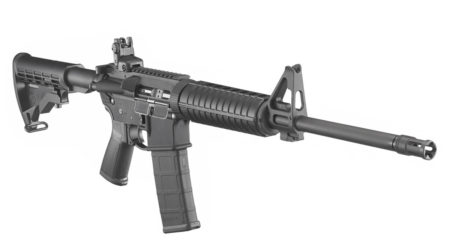 At first glance, the Ruger AR-556 is made of aluminum material and has a black coating. Taking a closer look, we see that the aluminum is 7075-T5. Upon picking it up, we were surprised at how lightweight and easy to carry the rifle is. Basically, it’s not over 6.5 pounds.

The exterior of the rifle has a hard-anodized black coating that adds to the overall appearance of the rifle. But of course, the more important job of the coating is to keep the rifle from rusting. On the steel parts and on the black material of the synthetic parts we notice a black oxide finish. So far, so good.

Next, we notice that the Ruger AR-556 comes with a black polymer handguard. We won’t talk about the specifics in this section. We’ll leave that for the next one.

The Ruger AR-556 has a full-featured upper receiver which includes a brass deflector, dust cover and a forward assist. To clarify why we’re mentioning these features, it’s because other rifles in the price range of the AR-556 usually neglect to include them.

Finally, we need to mention that the Ruger added an interesting touch to this rifle by including a branded pistol grip.

All in all, look-wise, the Ruger AR-556 gets a 9.4 rating from us. The whole package is quite pleasing and some of the additional features, like the brass deflector, dust cover, and forward assist are an extra bonus. And let’s admit, the branded pistol grip doesn’t hurt.

Now, let’s move on to how the rifle feels.

As we mentioned while reviewing the look of the Ruger AR-556, this rifle has a branded pistol grip. But what we didn’t mention is the fact that the pistol grip has an extended trigger reach that gives you better control over the trigger.

Now, let’s get back to the black polymer handguard that we mentioned in the section above. The Ruger AR-556 has a two-piece handguard that is made from a round-shaped heat-resistant glass-filled nylon.

One of our favorite features that Ruger added to the AR-556 is a Delta ring that can easily be removed without tools or a vise. This Delta ring was designed so that the handguard can be removed with ease. Just to clarify, basic AR Delta ring removal requires you to pull towards the rear, while turning the ring simultaneously. So, unless you’re using a vise, you’ll experience some difficulty doing this.

One thing you won’t have to worry about with this rifle is whether it will accidentally fire off. This concerned us at first glance, due to the fact that the rifle has an exposed trigger. However, Ruger thought of everything. The AR-556 has a small trigger guard that keeps the rifle from accidentally firing off.

Additionally, the guard has an opening that can fit a gloved finger, so no concerns there. For additional control over your shots, the single-stage trigger gives you extra control.

The safety lock feature is located near the trigger in the form of a small point. You can easily move the gun’s locking setup to move it from safety to fire with ease.

From weight to the overall feel, this rifle gets a 9.6 from us, since it’s easy to handle, and will practically fit you like a glove. Furthermore, the Delta ring is one of the features that amazed us the most.

The accuracy of the Ruger AR-556 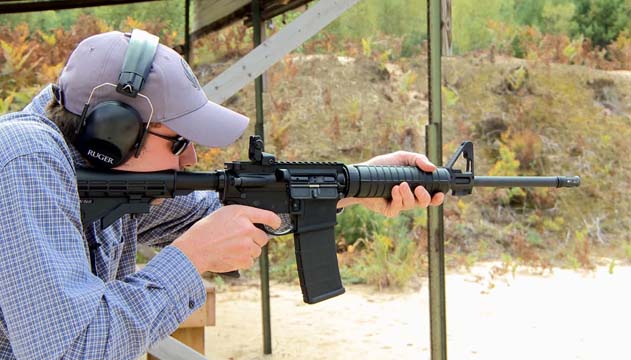 Now that we’ve covered the look and feel of the AR-556, let’s get to the part that will interest you the most. The accuracy of the rifle.

This rifle performed impeccably at the shooting range. First of all, it’s straightforward and easy to get used to. The flip-up rear sight is adjustable for windage, and the front post is also adjustable, but for elevation. Without making any adjustments, this rifle performed admirably. However, for those of you that want to stretch your shooting distance, pairing this rifle with quality electronic optics will increase the precision of your aim.

If you’d like to further enhance your precision, adding a scope to the mix is a good idea.

Testing out the AR-556 in different conditions allowed us to get a better idea of just how precise this rifle is.

Overall, Ruger has made it easy to produce accurate shots each time by making it easy to adjust the windage point depending on the weather conditions. On the other hand, you can also fold down the rear sight to add a better optics setup.

Ultimately, the Ruger AR-556 has no fault when it comes to accuracy. It performs well in windy conditions since it’s easy to adjust the windage to your liking.

As we mentioned, consistency is the most important factor when it comes to the accuracy of a rifle, and the Ruger AR-556 proved to be a winner. Therefore, we give a rating of 10.0 go to this amazing AR.

The reliability of the Ruger AR-556 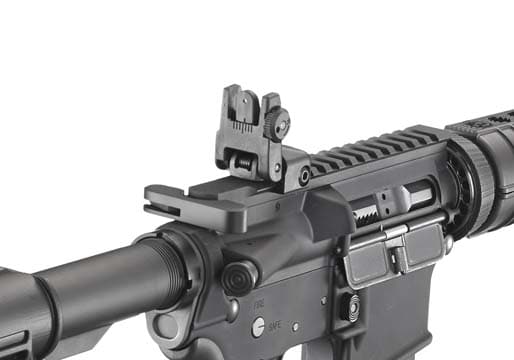 All things considered, the Ruger AR-556 is one of the most reliable rifles you can buy. This rifle is basically an entry-level AR, with some adjustments. The handguard is basic, and the rifle is comfortable to shoot.

Tested in less-than-perfect conditions, this rifle proved to keep a consistent shot at all times. There wasn’t anything we could identify as a problem. All in all, the AR-556 has exceptional accuracy potential if you can do your part.

Next, since the AR-556 has a small trigger guard, you won’t have to worry about it accidentally firing off. Additionally, you can still fit your fingers in the trigger opening even with gloved hands.

The Ruger AR-556 is as reliable a rifle as you can get. From performance to safety, it deserves all 10.0 points.

Ultimately, we can say that we are extremely pleased with all that this rifle has to offer. From the looks to the reliability, there wasn’t a single thing we didn’t like. In all honesty, we would be surprised if anyone that purchased this AR would have difficulty using it.

Now, let’s get down to the price tag. Since this rifle has so many great features, and it’s difficult to find any fault in the overall performance of it, the price must be through the roof, right? Wrong. 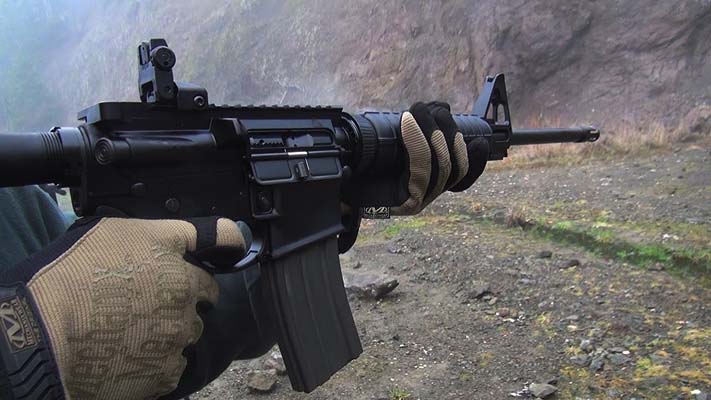 When it comes down to it, the Ruger AR-556 is an entry-level rifle that Ruger managed to improve upon.

Overall, Ruger consistently produces top-quality firearms, at fair prices, and the AV-556 is no exception. The combination of great performance and affordability is quite notable. There is no reason not to buy this gun, so if you’ve been considering buying an AV, but haven’t chosen one yet, you simply cannot go wrong with this gem of a rifle.