There’s a high demand for compact 1911-inspired handguns. The P938 and the Micro 9 are Sig Sauer’s and Kimber’s response to that call. The two handguns are similar in size and come in a variety of finishes. Also, both models are available with either 6 or 7-round extended magazines.

There are only slight differences between comparable variations from each manufacturer. However, Kimber’s models tend to be a bit less expensive than their Sig Sauer counterpart. 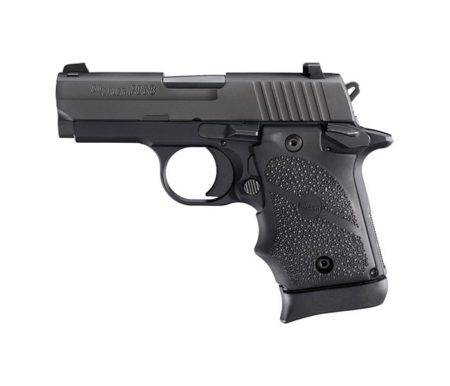 Sig Sauer’s P938 range is based on their trusted P238 platform and optimized for concealed carry. It’s an all-metal design with a lightweight anodized aluminum alloy frame. Meanwhile, the slide is stainless steel, either bare or with Nitron coating.

All of the standard models have a 3 in. barrel length and weigh 16 oz. Furthermore, all P938 handguns utilize an external hammer paired with an SAO trigger. The trigger pull is listed from 7.5 lb to 8.5 lb.

Most versions come with a Custom G10 grip. Of course, different grip materials and designs are available. Some models have a wood grip or a rubber wraparound grip. Additionally, the P938 has an ambidextrous thumb safety, but the magazine release is located on the left side only.

In addition, Sig Sauer promises that their P938 handguns deliver the same accuracy as their large-frame pistols. 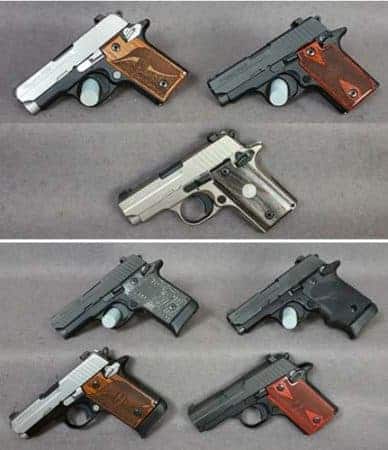 Within Sig Sauer’s P938 range, there are 15 models to choose from for virtually any use. We found all designs aesthetically pleasing, and they all have decent functionality for their intended purpose.

One considerable exception, though, is the P938-22 Target Micro-Compact — the .22LR caliber version. The barrel length on this model is a bit larger, measuring 4.1 in. Also, this is the cheapest model in the P938 range with the MSRP of $651.00.

Meanwhile, the most expensive P938 is the Rose Gold at $986.00. It boasts a G10 grip with a Rose Gold Medallion. Even the stainless steel slide is finished in Rose Gold PVD. It’s an elegant design that makes this handgun perfect for display.

Another unique version is the P938 Emperor Scorpion TB Micro-Compact. It’s the only model with a threaded barrel. It comes with a Piranha G10 grip and an FDE PVD-finished frame and slide.

However, the model that immediately caught our eye is P938 We The People. This version of the P938 rocks a custom aluminum grip embossed with 50 stars, making it a fitting tribute to the Second Amendment. Additionally, it features an engraved Distressed finish on the stainless steel slide.

Overall, the P938 We The People has an understated, almost stealthy, look. On the other hand, some careful design choices have been made in order to make it stand out from other fully black or grey handguns. Functionality-wise, it’s pretty much a standard P938 — 9mm caliber, an SAO trigger, and low-profile high-contrast sights on a 3 in. barrel.

The subtle design and the features of the P938 We The People make it the perfect gun for both concealed carry and display. Plus, with the MSRP of $772.00, it’s about $30 under the average price for models in the P938 range. 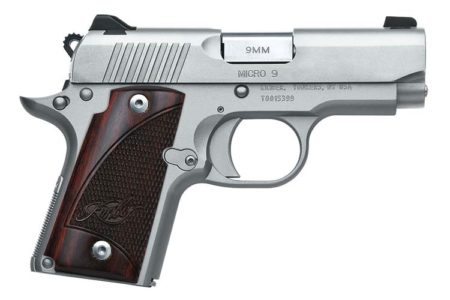 Obviously, Micro 9 is Kimber’s 9mm version of their Micro platform. It’s another all-metal design that utilizes aluminum frames for integrity and strength. Kimber points out that the ejection port is lowered and flared, and the magazine well beveled — all ensuring quick and flawless operation.

The barrel length of handguns in this range is 3.15 in, so they’re inherently a bit larger than the P938. However, the overall size difference is negligible. Furthermore, the Micro 9 weighs 15.6 lb with an empty magazine. So, at least on paper, it’s not as heavy as the P938.

The Micro 9 uses a bobbed hammer and a single-action short-pull trigger, set at 7.0 lb from the factory. Compared to the P938, Micro 9’s trigger feels a bit smoother. Furthermore, all Micro 9 editions have an ambidextrous thumb safety, with the magazine release once again available only on the left side.

These handguns also come with TRUGLO TFX sights, which a lot of people praise. Moreover, just like Sig Sauer, Kimber offers a plethora of finish and grip combinations within their 9mm carry gun lineup. All Micro 9’s are shipped with a 7-round extended magazine, which provides additional grip surface for larger hands. Naturally, 6-round magazines are also available. 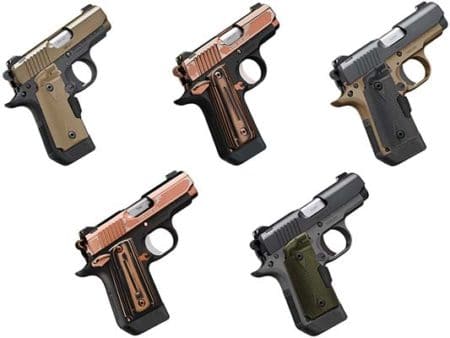 Kimber Micro 9 pistols are available in 14 editions. Some of them have two or three further versions to choose from — with white dot sights or with day/night sights, for example. So, there’s a model for almost every purpose imaginable.

The Two-Tone and Stainless editions will probably be the most tempting options to anyone choosing between Micro 9 and P938 pistols. They deliver an extremely similar performance to the Sig Sauers compact 9mm’s, but at a considerably lower price. Their MSRP is only $654.00.

Kimber’s most expensive Micro 9 is nowhere near as flashy as the P938 Rose Gold. But we think that the $1041.00 price tag is justifiable. The model in question is the Micro 9 CDP (Custom Defense Package). It features a laser grip, tritium night sights, and front strap checkering. Furthermore, this model undergoes a special Carry Melt treatment. The result? Rounded and blended edges that won’t snag on clothes or holsters.

The visually most interesting Micro 9 has to be the Bel Air from the Special Edition segment. With the tropical turquoise frame, mirror-polished slide and details, and an Ivory G10 grip, it’s a smart-looking homage to the Chevrolet’s iconic car. And at $864.00, it’s not that expensive for a display piece either.

Our personal favorite is the Desert Tan (LG). The laser grip on this model is finished in Desert Tan, and so is the slide. Meanwhile, the ejection port cover is bare stainless steel, and the frame is matte black. Along with the red laser, the Desert Tan (LG) utilizes white dot sights.

In our opinion, this is a good all-around gun, in terms of both functionality and appearance. The MSRP of the Desert Tan (LG) is $790.00.

So which one is better? 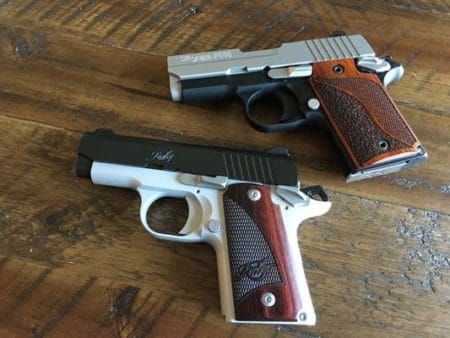 To be perfectly honest, it’s hard to tell. All 1911-inspired pistols simply work properly. It’s a popular design, so the ergonomics are familiar, and the use is intuitive. The P938 and the Micro 9 have similar overall dimensions, so size probably won’t be a factor when someone is choosing between the two.

Admittedly, only the Micro 9 is available with a laser grip. Also, Kimber’s representative is the cheaper one. So, it will be more appealing to anyone working with a limited budget, compared to the P938.

Our assumption is that a buyer’s choice will come down to the appearance in most cases. All we know for sure is that we wouldn’t mind carrying either a P938 or a Micro 9 since they both perform well and have great finishes available.

Because out of like 15 models, only less than 5 have an XRAY1.