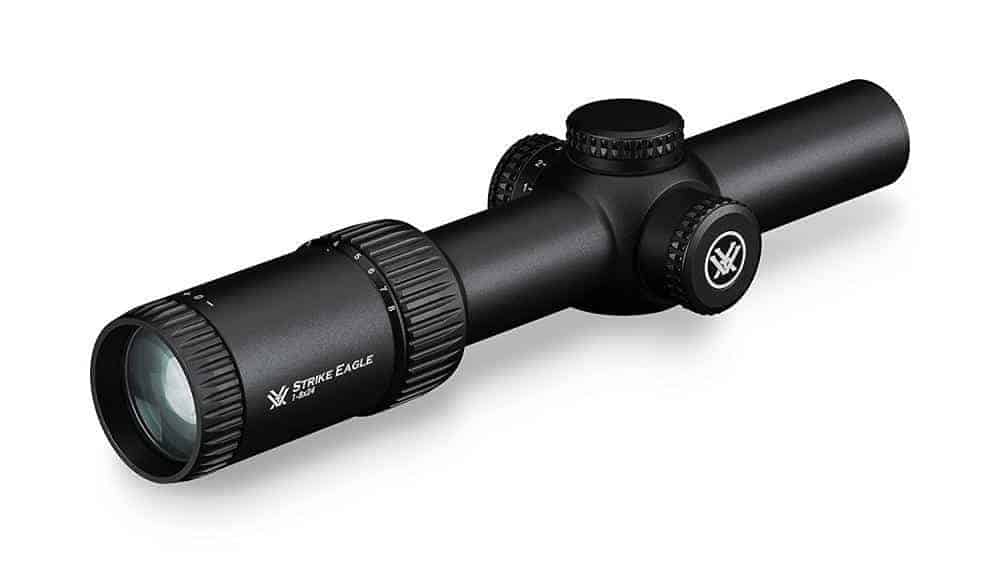 Most experienced marksmen will tell you not to expect to find a good rifle scope for under $2,000. Vortex Optics is here to prove that claim wrong by offering their Strike Eagle 1-6×24 scope for just a shy amount of $399. With that kind of price, I can only think that Vortex Optics is specifically targeting people who are new to the sport.

While many new hunters who get low-cost scopes end up disappointed, the Strike Eagle is actually very cost-efficient and packed with excellent features. It’s pretty much a sure thing, especially since there aren’t many other accurate and clear scopes on the market at its price point.

Without further ado, let’s see exactly what Vortex Optics is offering for such a low cost. Can this scope really compare to some pricier competitors? In this review, we’ll judge the Strike Eagle’s features according to their accuracy and reliability, as well as the way they look and feel.

The optical features of the Strike Eagle scope make it feel like a medium to high-quality scope, rather than the low-cost product it is. It has a clear, fully multi-coated glass to increase light transmission while dealing with glare. The 6-time magnification which is noted in the product name is a great feature as well, and the target is visible even with both eyes open.

Of course, the most important feature which ensures the accuracy of a scope is the reticle. The Strike Eagle scope has a horseshoe reticle etched into the second focal plane. That placement will ensure that the reticle remains the same size as you magnify.

Furthermore, the reticle has illumination settings with 11 brightness levels to help adjust the reticle at night. However, since the reticle itself is black, it should provide enough contrast during daylight hours as well.

Now, with the illumination on, shooting smaller targets may be a bit difficult. Due to the fact that the illumination encases the black reticle in red light, the reticle becomes a bit bigger when illuminated, which can obstruct the view. Also, some hunters may even consider the reticle itself too busy to make a clean shot.

So, on the one hand, the bigger illuminated reticle means that we’re able to see it during the day. On the other, the thickness may detract from its accuracy.

However, this is a minor drawback if we compare it to what the reticle is providing. Its crosshairs compensate for the bullet drop for up to 600 yards and help hunters achieve shooting precision at greater distances. Overall, I’m very pleased with the accuracy of this scope, despite the thickness of the reticle. 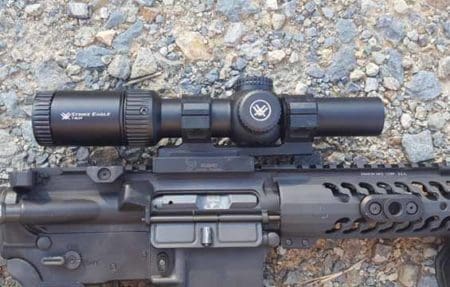 Fortunately, if the battery fails, the windage cap can store a spare. Also, even if the battery dies, you’ll still have the reticle there, since it’s in the glass itself. In addition to the reliable reticle, the Strike Eagle scope is also pretty durable overall.

The whole scope is actually made from a single tube, which improves alignment for accuracy and makes it stronger. The build itself is quite sturdy since the scope is made of aircraft-grade aluminum. So, it’s able to take some rough handling – especially since it’s also shockproof.

Aside from being built to last, the scope is also waterproof and fogproof. It has an O-ring inside to seal it from outside contaminants. Additionally, the nitrogen gas purging stops the lens from clouding over, which is especially important for early morning shooting.

The scope comes with removable lens caps, to protect the glass from scrapes. And then, there’s the Vortex warranty.

Vortex Optics are famous in the shooting community for their VIP warranties, which guarantee lifetime care. In fact, loyal Vortex product users have often praised the company for their excellent customer service. Some have even managed to exchange physically damaged products years after purchase – so, obviously, this brand has our backs.

All in all, the scope performs better than most products in its price range. However, experienced hunters with deeper pockets might want to aim higher, as they’ll be paying for higher glass clarity. 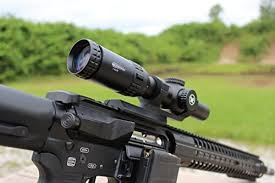 Both the appearance and overall feel of a scope are important for many reasons. Naturally, a scope needs to be able to withstand rough handling while remaining concealed during a hunt. In addition, it should look and feel good on the rifle itself – after all, we’re all allowed a bit of vanity once in a while.

Right out of the box, the Strike Eagle is a fairly standard, tactical-looking scope, though it may be just a bit on the heavy side. Still, its weight isn’t noticeable enough to actually drag down its performance, which is the most important thing.

The scope has a hard anodized finish, which will lend the scope extra durability points, as well as conceal it during a hunt. Since this kind of finish leaves the scope looking matte, it should prevent the prey from seeing the sun glare against the scope’s surface.

The lens has some fisheye distortion around the edges at no magnification, so it wouldn’t be all that great at close distances. However, the busy and somewhat thick reticle means that it won’t be very capable at very great distances either. Essentially, this scope will work at up to 600 feet, but it won’t be absolutely life-changing by any stretch of the imagination.

Like I explained, the Strike Eagle is waterproof, fogproof, and shockproof. Along with the aircraft-grade build, these features make it just about indestructible.

The lens caps are a welcome addition since many scopes don’t come with those. They feel nice and sturdy, just like the scope itself.

In fact, all of the settings are nice and smooth as well. The magnification is a bit stiff at first but should loosen with regular use, as always.

The windage and elevation caps are very easy to remove. Unlike some other scopes, this one allows hunters to manually turn the windage turrets without having to reach for a tool.

The turrets are textured and tactile, so they produce audible clicking noises as you turn them. Also, they should be easy to grip even though they’re on the smaller side.

Overall,the look and feel of the Strike Eagle are on par with some of the more expensive products on the market. 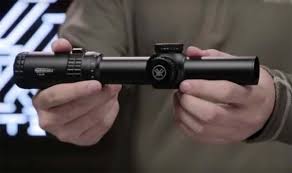 Ultimately, the Vortex Optics Strike Eagle 1-6×24 scope is an excellent entry scope, which will especially benefit dynamic shooters. It’s got 6-time magnification, even though 4-time magnification is standard.

The scope’s glass and reticle are fairly clear. In addition, the reticle can be quickly and easily focused thanks to the scope’s fast focus eyepiece. Along with the illumination and the general high-quality build of the product, the Strike Eagle certainly deserves to become a staple in every new and casual hunter’s gear bag.

Another big part of the decision to buy a scope comes with choosing the right company. Vortex is certainly great by me. Particularly, because they’re willing and even eager to provide replacements for damaged products, courtesy of their VIP lifetime guarantee. And hunters certainly have need of replacement gear, once in a while.

Essentially, you can’t go wrong with the Strike Eagle, especially if you’re looking for a solid American product at an incredibly affordable price. So, if you find yourself interested in shooting close and far range, and not quite knowing what you should start with – why not try a scope that will surely become a classic?

Looking for another Vortex product? Check our review about the Vortex Viper 6.5-20×50, read it right here.

The Vortex Optics Strike Eagle 1-6×24 is an excellent riflescope and one that deserves your attention. It's definitely one of the top-tier riflescopes out there today.